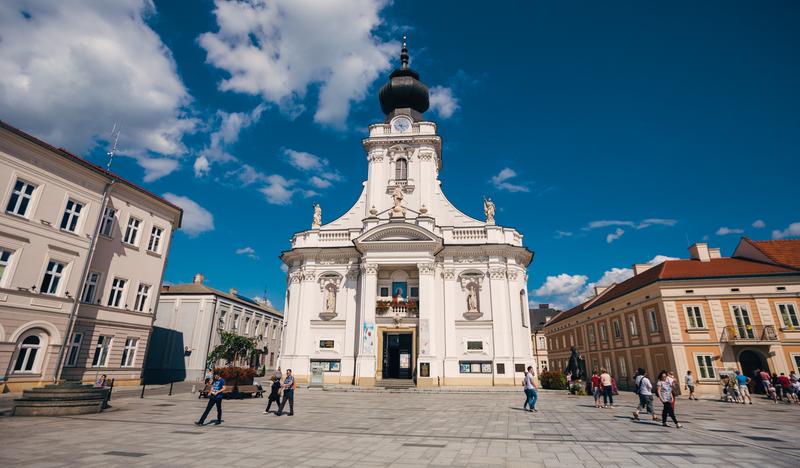 The home town of John Paul II gives an unforgettable first impression. Over the spacious Market Square towers the impressive church surrounded by renovated city residences, well-kept Rabat flowers and cafes that welcome for a longer stay.
Wadowice situated 50 km (30 miles) south away from Kraków, lie by the Skawa River at the foot of the picturesque mountain range of the Low Beskids, which were favourite “home mountains” of Karol Wojtyła. The future pope John Paul II was born in the modest city residence at 7 Kościelna Street, next to the Market Square and a church. This city residence belonged at that time to Yechiel Bałamuth, trader and a president of a Jewish council.  Presently, this building houses Museum of John Paul II Family Home. In the former two room apartments of the Wojtyła family only few elements of primer interior were preserved. Nevertheless, tourists can see many other relicts linked to the life and work of the future Pope. Among exhibits you can see family pictures, copies of school certificates of small Karol, documents from different stages of his life, even skis, a rucksack and a paddle, and proofs of passion for tourism of this famous man from Wadowice. In the neighbourhood of the Pope’s home, the Marcin Wadowity City Museum was established in one of the building from the beginning of the XIX century, which presents historic collections of Wadowice area. Apart from exhibitions devoted to the history of the city you can admire periodic exhibitions, of which many are linked to the life of Karol Wojtyła. Kościelna Street leads to the Market Square, that is, the square of John Paul II. Here, at the corner of this street and the Market Square is the Basilica of the Presentation of the Blessed Virgin Mary. The main municipal sanctuary in the present shape derives from the middle of the XVIII century and represents late Baroque style. The characteristic facade with one central tower is preceded by the three-nave interior with side chapels. The church is mainly famous as the place of Karol Wojtyła christening; a Gothic christening place can be seen in the chapel of the Holy Family. Worshippers come to the basilica also to see the marvellous painting of the Our Lady of Perpetual Help. In 2006, the special chapel devoted to John Paul II was established, which was directly blessed by the successor of the Holy See, Pope Benedict XVI.  In the city also survived many other building connected with Karol Wojtyła, just to name a few: school buildings, to which he attended, and a neo-Romanesque monastery complex of Discalced Carmelites. All these places can be visited while walking along Karol Wojtyła Route. After finishing a walk it is worth to have some rest at the Market Square and try Wadowice cream cake (popularised by Pope). Before the war such cakes were served in the elegant cafe of Hagenhubert. It is there, where Karol Wojtyła was eating them after the Matura Exam, which he reminded during his last visit in Wadowice in the year 1999. Today, the cafe no longer exists by there are many others that serve these most popular cakes in Wadowice.

Worth seeing in the vicinity !
Park of Miniatures in Inwałd, where you can see St. Peter Square in Rome, the Eiffel Tower, even the Great Chinese Wall, and many other buildings in the scale of 1:25
Amusement Park Dinoland is situated next to the Park of Miniatures and presents models of Dinosaurs. Also in Inwałd there is a small zoo, the second attraction for children
Landscape Park of the Low Beskids, where it is worth to go hiking
Sucha Beskidzka, where you can admire the Renaissance castle referred to as „the Small Wawel” and the wooden, XVIII century ‘Rome’ Tavern, where you can try old delicacies.
Kalwaria Zebrzydowska, where among the hills and peaks of the Makowski Beskid there is the sanctuary with avenues for pilgrims, along which there are chapels and small churches. The centre of the sanctuary is a Baroque Church and monastery of Benedictines, and the whole complex as the most precious one of that type in Europe, was inscribed on the UNESCO List. 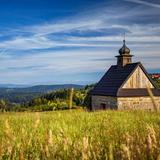 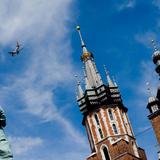