Winter in Małopolska. Here one can enjoy it the longest

Winter in Małopolska. Here one can enjoy it the longest

Actively in the winter
News

Longer winter in Małopolska for everyone

The calendar winter lasts from 22 December to 21 March. Climatically, it is the time when the average daytime temperature falls below 0 degrees C. Winter in Małopolska is the wintriest! In Zakopane, such time begins at the end of November, in the Tatra Mountains even at the end of October. Climatic spring comes to the Tatra Mountains only at the beginning of May. In some Małopolska mountain ranges, the wintertime is prolonged. For example, on Turbacz average annual temperature is only 4 degrees C, snow is even one and a half metres thick and remains up to 140 days a year! Much longer lies also on Mogielica in the Wyspowy Beskids, Radziejowa in Beskid Sądecki, peaks of Trzy Korony or in the Niski Beskids.

However, notwithstanding the season and weather in Małopolska, everyone will find plenty of attractions for themselves regardless of age and preferences. Those who prefer active outdoor recreation will not be disappointed, nor will supporters of learning about tradition and culture. We also invite lovers of visiting spas and feasting together, for whom numerous health resorts and spa complexes, inns serving regional dishes and thermal baths with a view of the Tatra Mountains await. What is more, there are many places in the region prepared especially for children thereby Małopolska is an ideal place for a family winter holiday.

New attractions and exciting places, often surprising tourists with their originality, constantly appear. An example? The World Snow Day celebrations held every year in January in Zakopane. In 2021, the event took second place in the global competition for the best organiser of the World Snow Day, in which 103 resorts participated!

Crowds of spectators are also attracted to Mobilna Ścigacka, czyli zjazd na byle (Mobilna Ścigacka, i.e. downhill on anything), the most significant event of this type organised on the slope of Kotelnica Białczańska resort, or a game called Przejazd przez knajpę (Crossing the pub), whose participants ski through...a restaurant (sic!) and perform freestyle acrobatics jumping off its balcony. 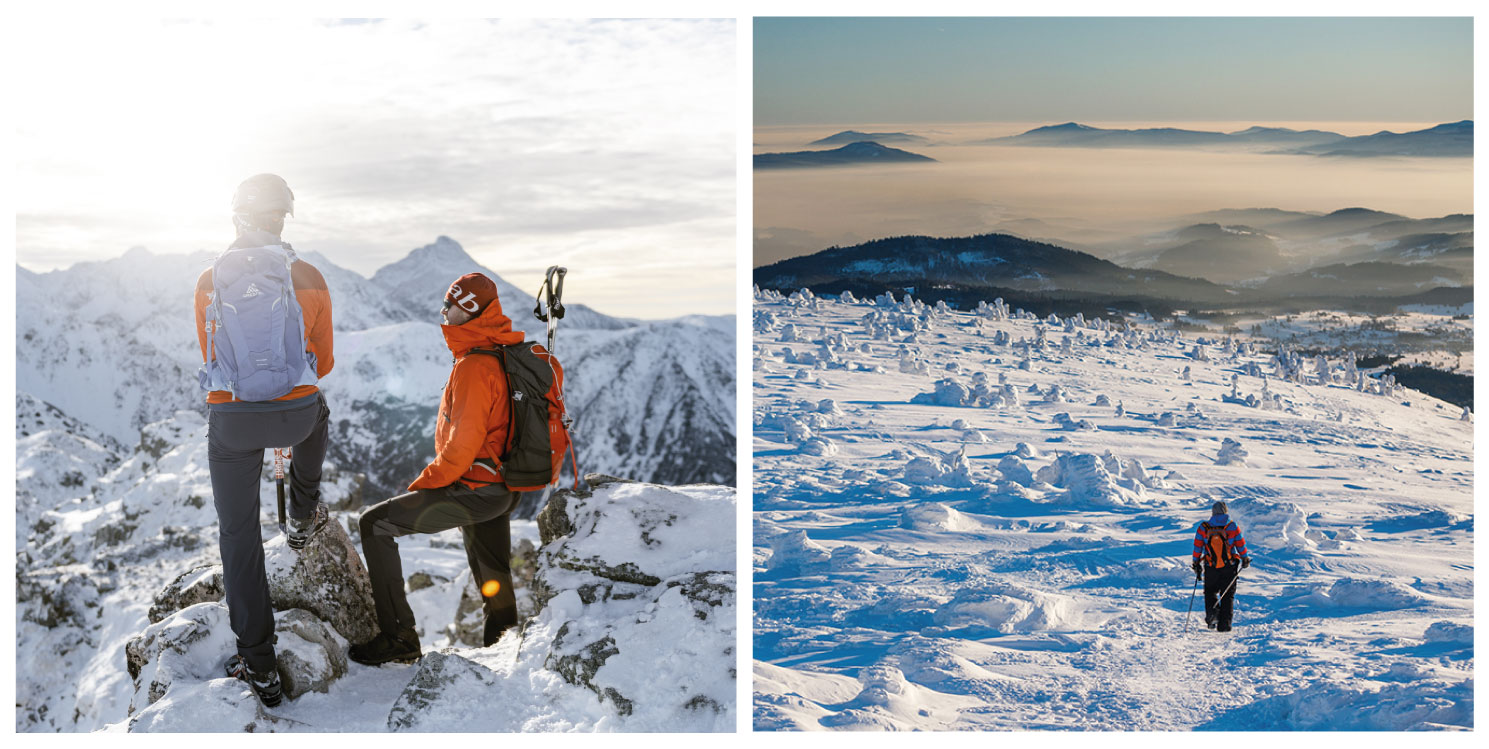 In Małopolska, every skier will find a slope to match their skills. The offer is getting richer, new ski stations are opening, and the existing ones are making their offer more attractive. Once the weather gets cold, snowmaking starts on slopes so that ski lovers can indulge in their passion as soon as possible. Proper maintenance of the slopes makes it possible to ensure good conditions on the pistes even without significant snowfalls. The ski season often begins in Małopolska in the first decade of December.

The southern part of Małopolska is a skier paradise. Zakopane is called the winter capital of Poland, and nearby - in Białka Tatrzańska - the largest ski resort in Podhale, the Kotelnica Białczańska Ski Resort operates, and the Jaworzyna Krynicka Ski Station is thriving. Practically in every part of the region - from the Mały Beskids in the west to the Niski Beskids in the east, from the foothills to the Tatra Mountains, there are smaller and larger ski resorts. Even near Kraków (e.g. in Podstolice or Siepraw, there are several ski lifts which can be visited during a short trip from the City of Kraków.

Ski centres are increasingly joining forces, offering joint access to a dozen or even several dozen routes within one ski pass. Additional attractions are being created on the slopes (e.g. snow parks for snowboarders), special activities for children are being organised, and the food and beverage offer is being extended. All that is intended to make skiers feel comfortable throughout the season. In many resorts, the ski season lasts even 4-5 months, often beginning at the turn of November and December and ending at the turn of March and April.

One can regain their strength and warm up in climatic regional inns, experiencing a feast for the senses. The taste, smell and appearance of dishes characteristic of Małopolska will make one's head spin, especially when accompanied by good beverages. We particularly recommend the inns on the Małopolska Gourmet Trail and those included in the Małopolska Village for Gourmets trail. With good food, no winter is too bad! 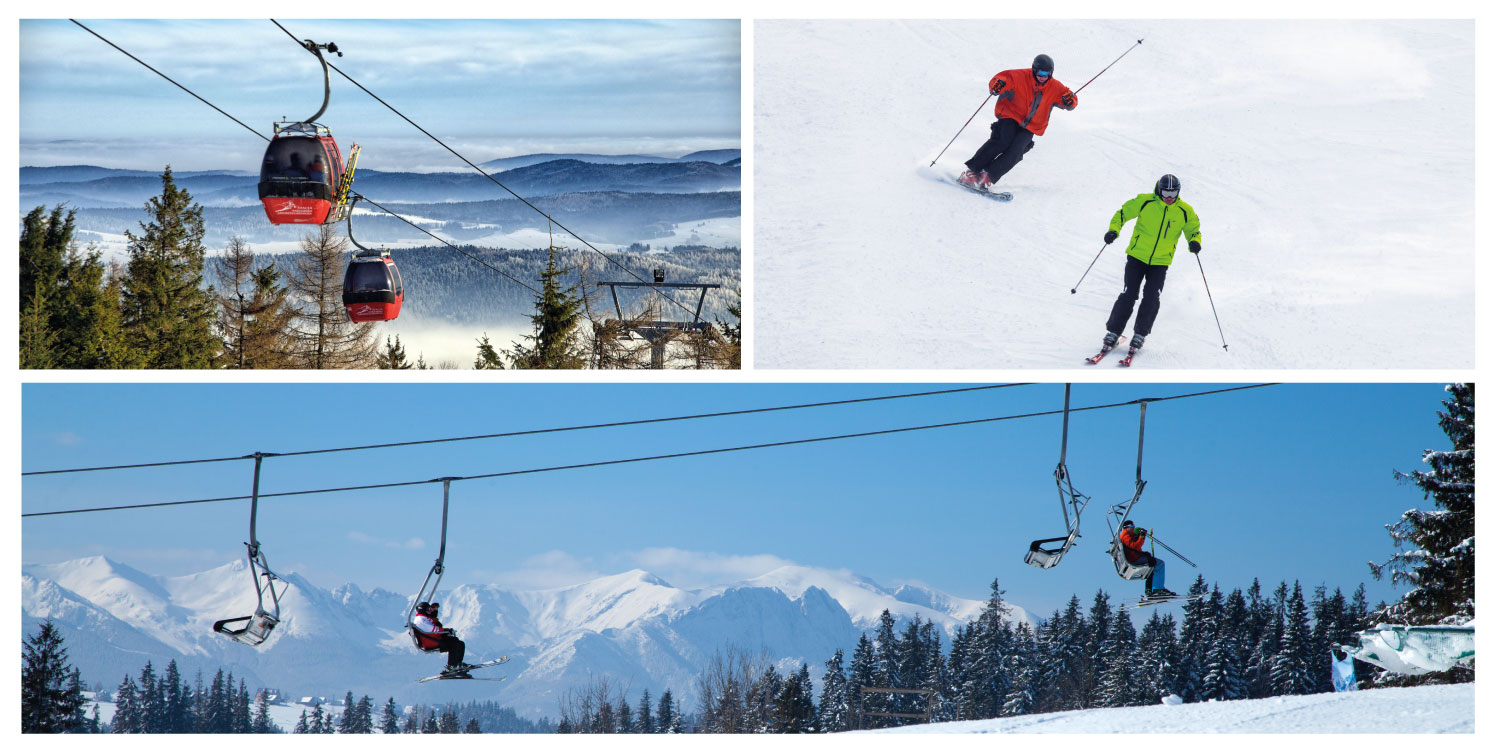 The offer for lovers of cross-country skis is getting richer every year. The environs of Nowy Targ, the Gorce Klikuszowa Cross-Country Ski Centre, the Czorsztyn-Ski Station, snowy routes through forests, trails around Mogielica Mountain, or in Ptaszkowa, are just examples of places where young and old, beginners and advanced cross-country skiers are welcome. Instructors, equipment rentals and varied routes are waiting for them.

If snow conditions permit, cross-country skiers can head out on individually selected trails in the Spisz, the Niski Beskids, the foothills or other regions of the Małopolska region. 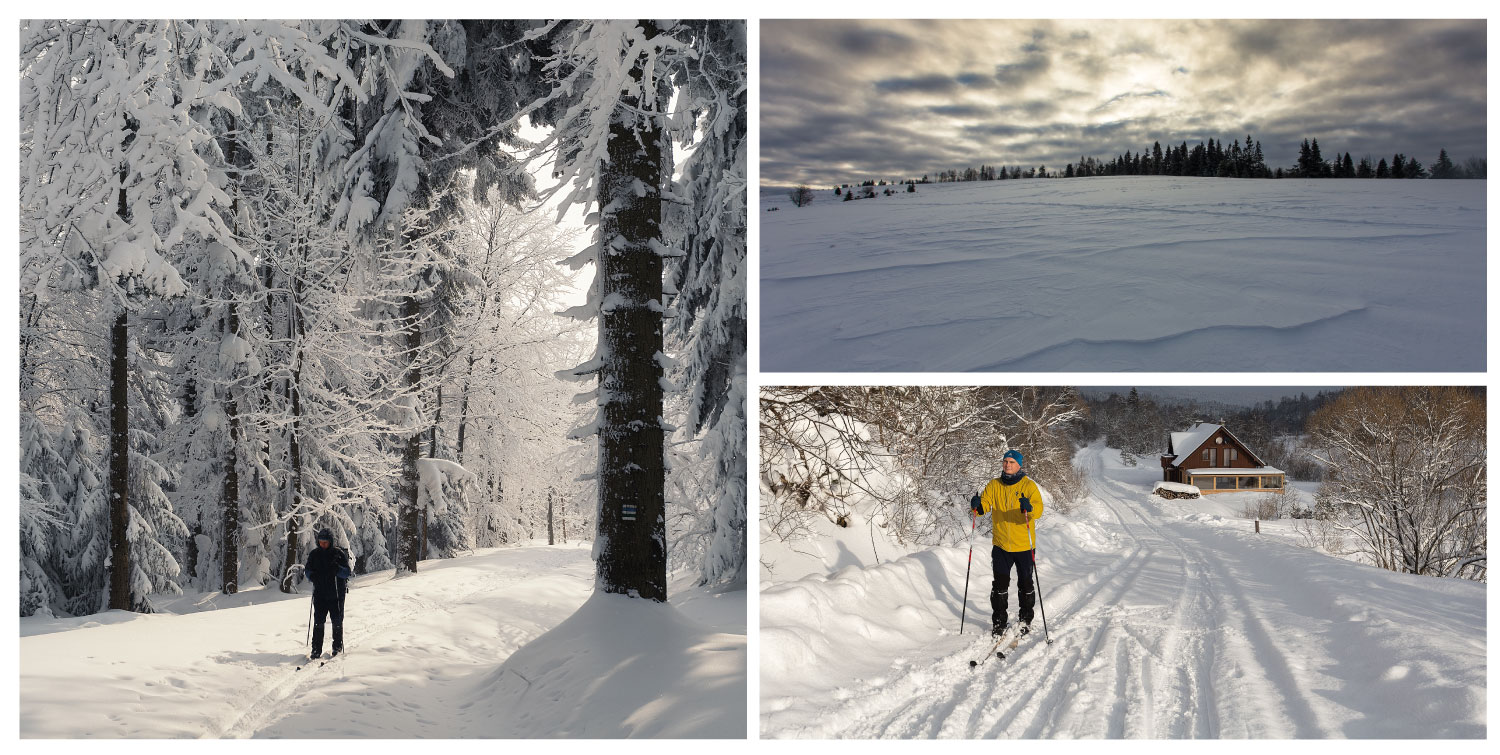 Ski tourers will also find many trails where one can enjoy long, fun descents after not too strenuous ascents. In Beskid Sądecki, the Maków Beskids and the Gorce Mountains, numerous trails meet these criteria. Even the Tatra Mountains do not lack such routes, as the organisers of the Skiturowe Zakopane project prove. However, a skiable adventure in the Tatra Mountains requires good physical preparation, advanced skiing skills, knowledge of topography, awareness of avalanche danger and absolute observance of the Tatra National Park’s guidelines on nature protection.

Nonetheless, winter in Małopolska for ski tourers is not only about the Tatra Mountains. More and more people are hiking on skis of this type along trails in the Gorce Mountains and the Wyspowy Beskids, Beskid Sądecki or Pieniny. The choice of possibilities is enormous, much depends on the ski touring enthusiast's skills, strength and preferences. 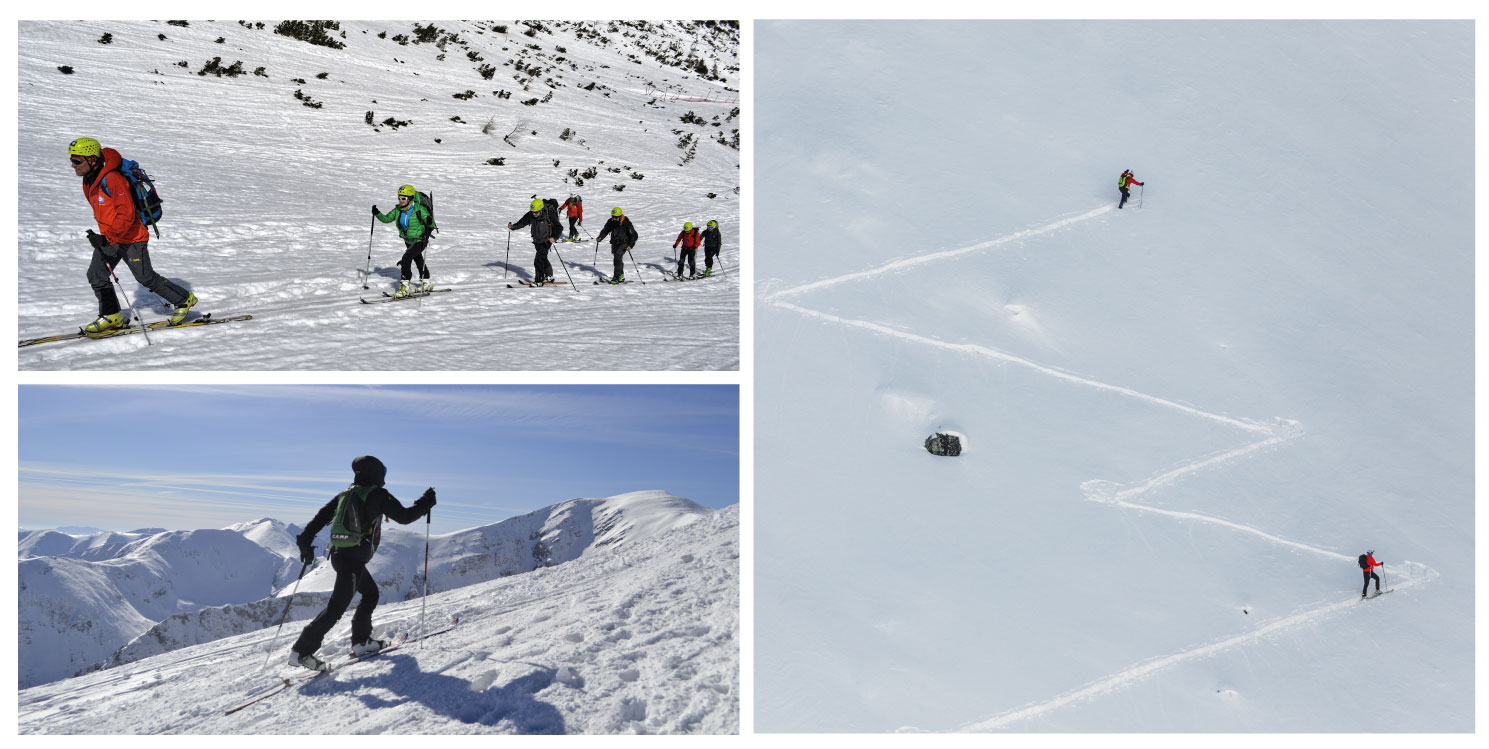 Winter in Małopolska: Recreation with children

Małopolska is a paradise for beginners and intermediate skiing enthusiasts, as the gentle slopes are ideal for acquiring and improving their skills. Thanks to the fact that many ski resorts have several routes of varying difficulty, they are ideal for families.

The skiing offer is only an insignificant part of the proposals for children. Young and old alike will be thrilled by Snowlandia in Zakopane, an amusement park conjured up from ... snow, featuring a snow maze, pyramid, toboggan run or igloo with sculptures. Special winter proposals for children have, among others, Energylandia in Zator (the most extensive amusement park in Poland), the Miniature Park in Inwałd and the Experience Garden in Kraków.

Moreover, the ski resorts provide attractions for their youngest visitors by organising animations, skill contests and sports competitions. In the evening, or when the weather is not good, one can read the booklet "Małopolska. Four Seasons of Children. Winter" to acquaint their child with Małopolska in an amusing way, or look for inspiration for spending time with their family in the "Małopolska for Children" guidebook. 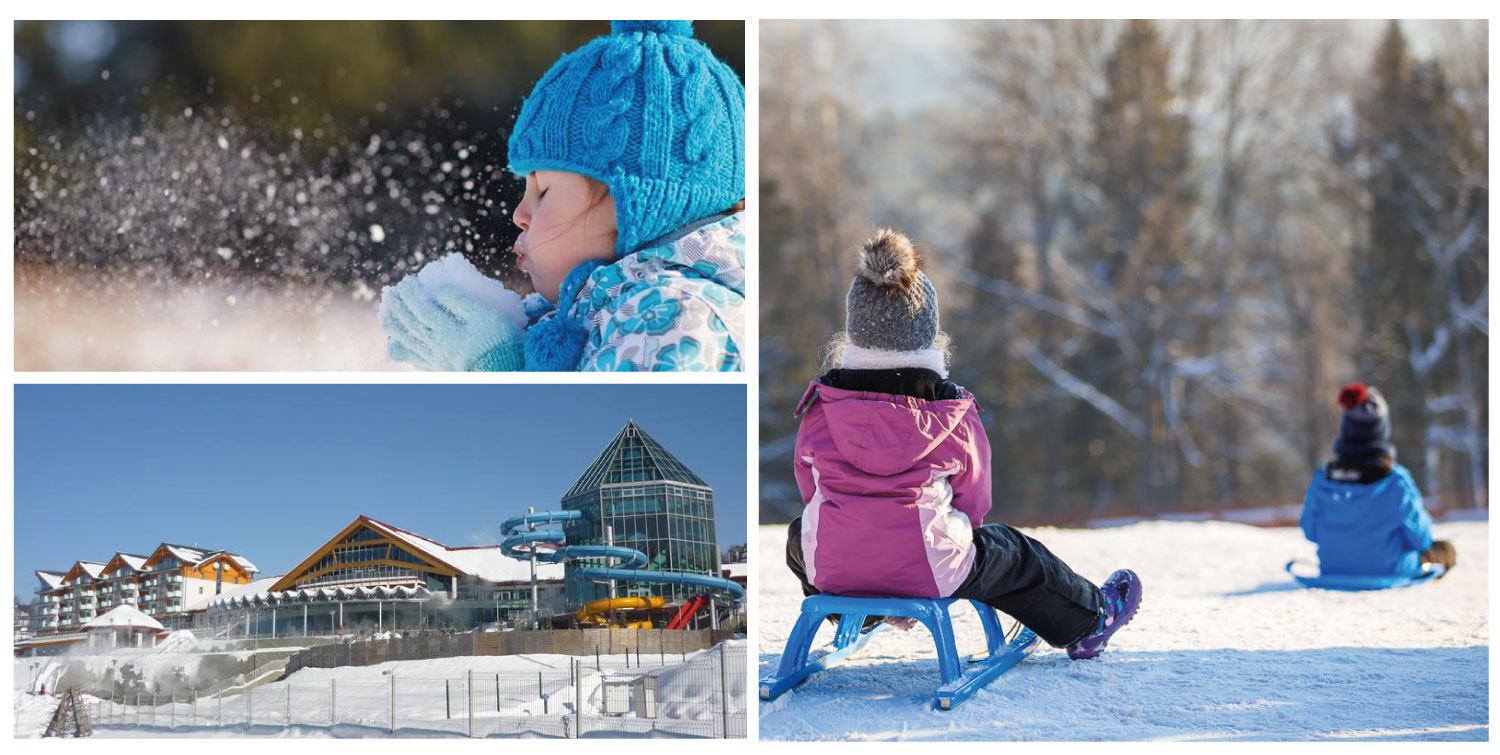 The wealth of routes

Notwithstanding the time of year, when visiting Małopolska, one can set out on a great many trails, both the literal ones such as walking, cycling and horse riding and the thematic ones. It is worthwhile taking the Małopolska Gournet Trail or the Małopolska Wine Trail, getting to know the trails associated with Pope John Paul II, the castles along the Trail of the Eagle’s Nests and the artists on the Trail of the Traditional Crafts. Everyone can also create their route, which will include the places of most significant interest to them, e.g. museums of famous people, towns connected to famous people, the strangest exhibits, or small private museums. 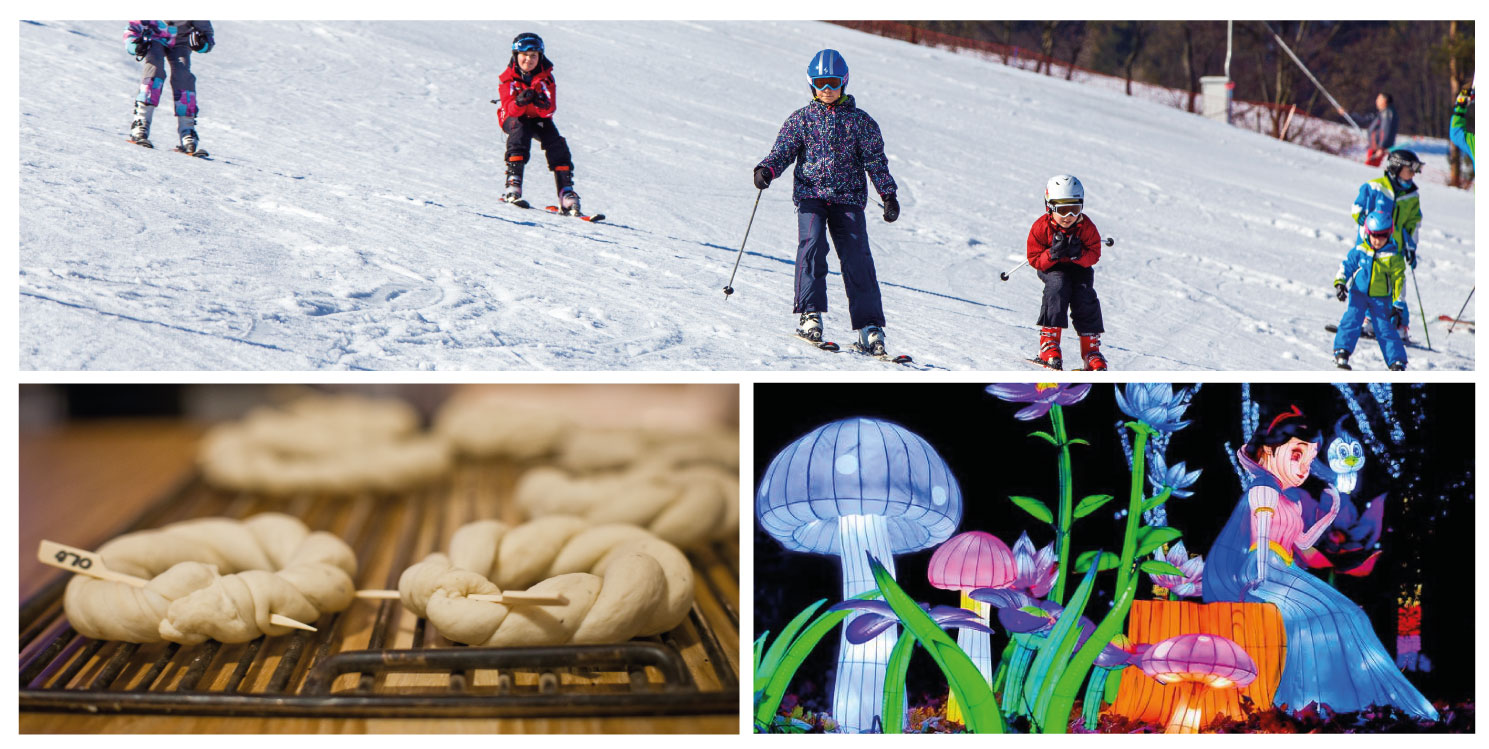 Tradition and culture in Malopolska

Active recreation and interesting places are not the only attractions that Małopolska offers. Furthermore, our region is wealthy in culture, with various traditions that can be explored during many events held during the Christmas and New Year period and during the Carnival.

Traditionally, at the time of year in Kraków, one can see cribs, which are on the UNESCO World Heritage List. At the beginning of December, there is a competition for the most extraordinary constructions, which sometimes take the creators several months to do. In a competition organised by the Kraków Museum, prizes are awarded to the most impressive cribs that can be seen from December to February in the Kraków Museum, in the Krzysztofory Palace at 35 Market Square.

Like every year, around 20 cribs will be displayed in Kraków's squares and parks, shop windows, hotels and restaurants, and shopping malls. The cribs will take on a new context while set up in glass illuminated display cases. They will be on display until 31 January. The joint " Wokół szopki" (Around the Crib) walk will be on 6 January 2022.

On the first weekend after Santa Claus comes, angels from all over the world and the sky descend on Lanckorona to take part in the Winter Angel Festival.

At the turn of the year, the tolling of the Sigismund Bell is exceptionally frequent from the Wawel Cathedral. It takes 12 bell-ringers to set the giant in motion (the Sigismund Bell, including its instrumentation, weighs 12,600 kg), the sound of which is carried as far as 30 kilometres. It can be heard on Christmas Eve (at 23:45), Christmas Day (at 9:45), New Year's Day (at 9:45) and Epiphany (at 9:45). Another great attraction is the live nativity scene at the Franciscan Monastery at Franciszkańska Street. On Christmas Eve and Christmas Day, it is admired by crowds of Kraków inhabitants and tourists, who co-participate in nativity plays and carol singing. 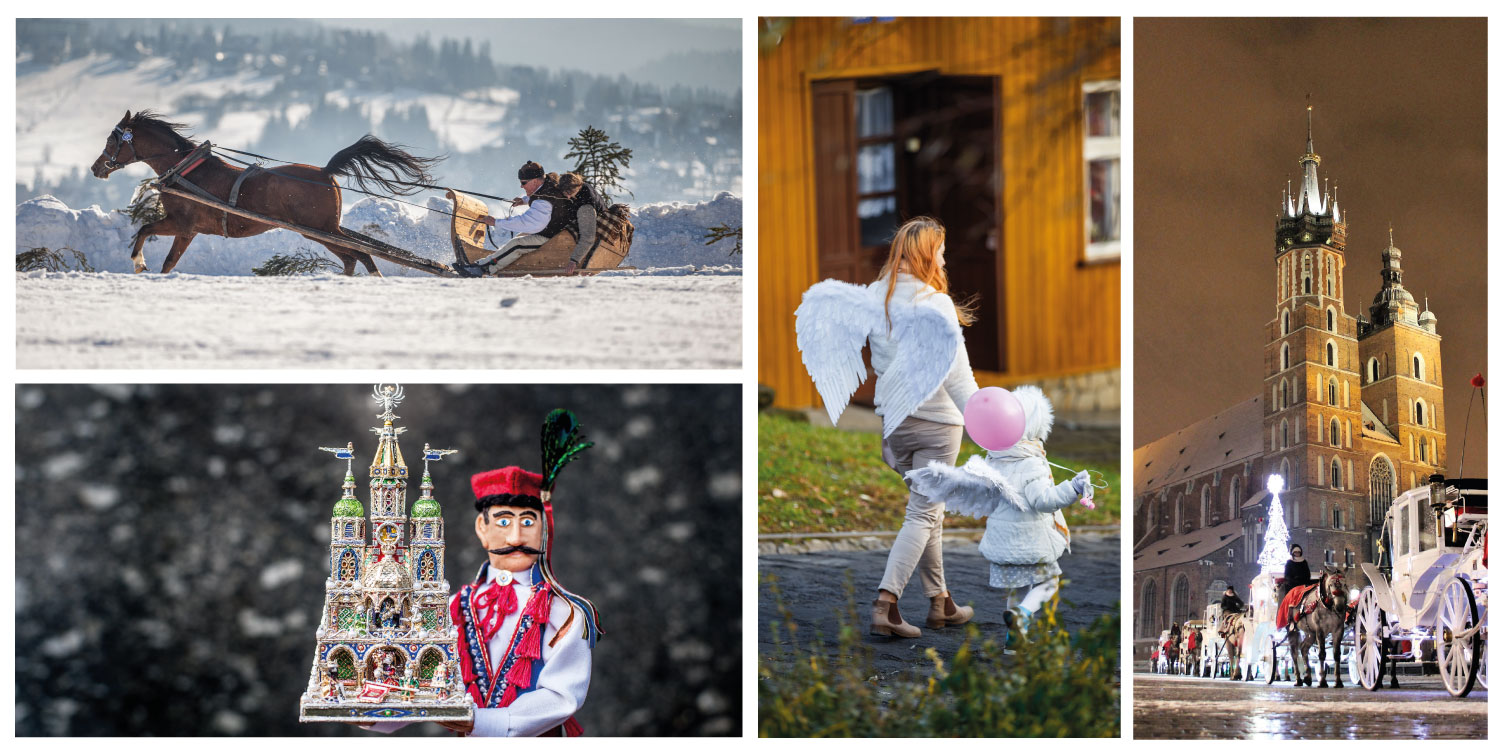 Besides, December is the time of Christmas markets, where one can buy handicrafts, Christmas decorations, taste regional dishes and traditional Galician mulled wine. In 2007, the Kraków fair was included in a book published in Italy about the most incredible Christmas fairs in Europe. The Christmas Market in the Galician Town in Nowy Sącz and the Christmas Feast at Market Square in Oświęcim are less known but equally climatic.

Bukowina Tatrzańska hosts the Highland Festival, Zakopane hosts Parada Gazdowska with exciting sledge races, and on 6 January, many towns and cities host processions of the Three Kings. In the eastern parts of Małopolska, one can also experience Christmas in January, together with believers of Eastern rites.

When planning a stay in our region, it is worth taking a look at the calendar of events and considering matching the date and purpose of one’s trip with the dates of interesting events that will make their holiday more pleasant and varied. Undoubtedly, taking part in them will be a great experience, provide many impressions and remain in the memory for a long time since there is plenty to choose from.

Winter in Małopolska must be safe!  #NajważniejszeWrócić

Staying in the mountains is a great pleasure providing one observes the safety rules. They are especially imperative in winter when avalanches can be expected in the high parts, and there are icy conditions or heavy snow that makes a trip challenging in many places. That is why it is crucial to prepare properly for a trip to the mountains, plan it well and take care of appropriate clothing and equipment.

Valuable tips for a safe holiday are provided in the "Najważniejsze wrócić” action conducted jointly by the Malopolska Tourist Organisation and the Tatra Mountains Volunteer Search and Rescue Service.

Knowledge of the avalanche ABC will be useful not only in the higher parts of the Tatra Mountains but also on the way to Morskie Oko Lake from the car park in Palenica Białczańska or in the Babia Góra region.

See you in Malopolska!