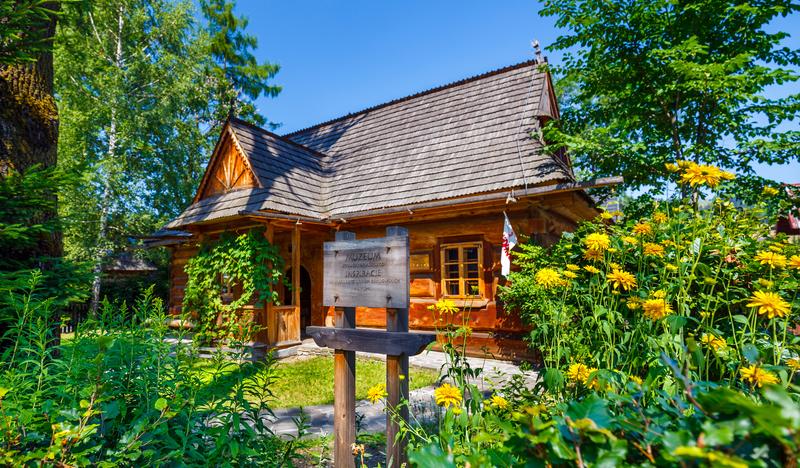 www.muzeumtatrzanskie.pl
biuro@muzeumtatrzanskie.pl
Show details
In a wooden cottage, which is one of the most valuable monuments of folk architecture in Zakopane, there is a branch of the Tatra Mountains Museum with the exhibition Inspirations of Zakopane, presenting the folk sources of the Witkiewicz's Zakopane style, the first Polish national style.
A highlander's cottage, built by Joachim Gąsienica-Sobczak in 1830, is one of the oldest wooden buildings in the city. Around 1870, the building was expanded, a rear entrance hall, a chamber, a room and a front four-column porch with a gable decorated with a “słonecko” (sun) were added. It is a wooden hut on a rectangular plan, with a partial basement and covered with a half-gable shingle roof. The gables, with windows illuminating the attic, are decorated with "jodełki” (herringbone) motifs, and "pazdurs” crowning the ridge of the roof and the porch. Until 1975, the house belonged to the heirs of the family, who sold it to the Tatra Museum for it to be repurposed into apartments. In the years 1978–1980, during the renovation of the cottage, the foundations, damaged structural elements, log beams and roof covering were replaced. In 2008, it was adapted for museum purposes, the building was replaced, a new shingle roof, geothermal heating and lighting were installed, the reception desk, toilets were arranged, the facility for people with disabilities was adapted, and already in 2009 a branch of the museum was opened with a permanent exhibition showing the roots of the Zakopane style, furnishings of a highlander cottage and ethnographic collections gathered at the end of the 19th century.
The exhibition is located in two rooms at the front of the building. The black room, where the life of a highlander family was concentrated, is decorated with the oldest exhibits, just like the rooms in the second half of the 19th century. The collection of Maria and Bronisław Dembowski, created in the years 1886–1893 and donated to the museum in 1922, is exhibited in the representative white room. They are ornamental in form and richly decorated: paintings on glass, ceramics, spoon racks, sculptures, costumes, and shepherd's equipment, which inspired Stanisław Witkiewicz in creating the Zakopane style. 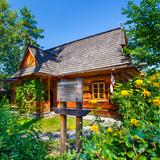 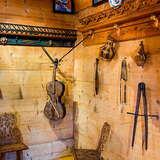 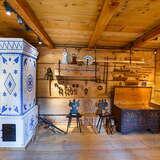