13. The Sanctuary of Our Lady of Fatima in Zakopane, Krzeptówki. - Obiekt - VisitMalopolska

13. The Sanctuary of Our Lady of Fatima in Zakopane, Krzeptówki. 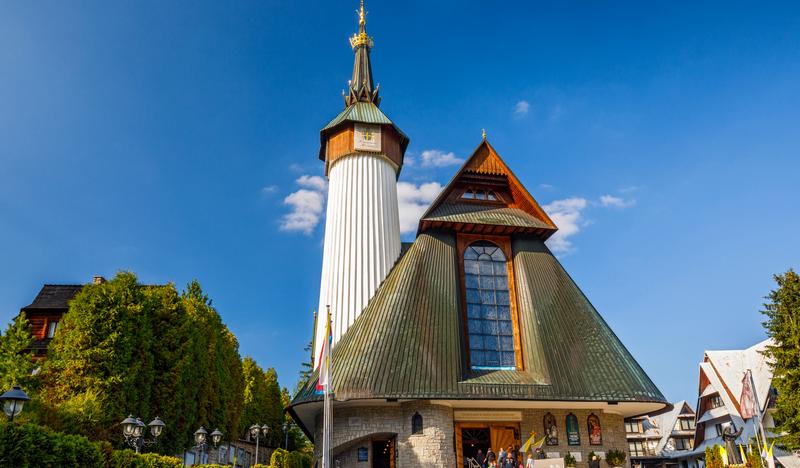 www.smbf.pl
Show details
In Zakopane and the Tatra Mountains you can visit many places connected with Karol Wojtyła. An important one is the Sanctuary of Our Lady of Fatima in Krzeptówki in Zakopane. The church was built by the highlanders from donations as a vote of gratitude for saving the life of the Holy Father John Paul II during the assassination attempt in St. Peter's Square on May 13, 1981.

Before the Sanctuary was built in Zakopane's Krzeptówki, there was only the Chapel of the Pallottine Fathers with the statue of Our Lady of Fatima, donated in 1961 by Cardinal Stefan Wyszyński, and then consecrated by Bishop Karol Wojtyła. In 1987, already as the Pope, he coronated her in Rome in St. Peter’s Square and ten years later, he personally consecrated the church. At the sanctuary in Krzeptówki, in the gardens, there is also an altar, at which in 1997, Saint John Paul II celebrated a memorable, solemn Holy Mass at the foot of Wielka Krokiew and accepted the homage of Polish highlanders. At the Sanctuary of Our Lady of Fatima in Zakopane there is also a monument to the Pope and a replica of the cross from Giewont. The road to the Sanctuary is marked by banners hanging over the street. They are the final preparation for the pilgrims to meet Our Lady of Fatima and her Son. They remind them of the need to trust the Blessed Mother and the role of praying the rosary. The quotations from the Pope's teaching help to remember that. Dozens of rosaries were incorporated into the fencing spans so that the area of the Sanctuary would be symbolically entwined with the prayer that Our Lady asked for in Fatima.

The church is considered to be one of the most typical examples of the Zakopane style and the most beautiful wooden sacred building in the Tatra Mountains next to the Old Church on Kościeliska street in Zakopane. Its log architecture on a high stone foundation, with a steep mansard roof topped with a delicate turret, blends in with the deep green of the spruce forest on the slopes of Jaszczurówka. The interior of the chapel is decorated with stained glass windows designed by Stanisław Witkiewicz. The building was erected by highlander carpenters with Aureliano Blacha (Blcha) at the helm, who probably designed the main altar. On both sides of the carved wooden altar, there are colourful stained glass windows with Our Lady of Częstochowa with the coat of arms of Poland on the right, and Our Lady of the Gate of Dawn with the coat of arms of Lithuania on the left. Side altars by the folk sculptor Józef Janos from Dębno were placed in 1954. While in Jaszczurówka, it is worth hiking to Rusinowa Polana in the Tatra Mountains, where there is a charming chapel of Our Lady of Jaworzyna, Queen of the Tatras.

13. The Sanctuary of Our Lady of Fatima in Zakopane, Krzeptówki. 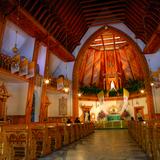 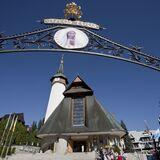 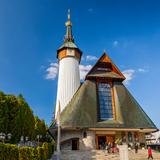