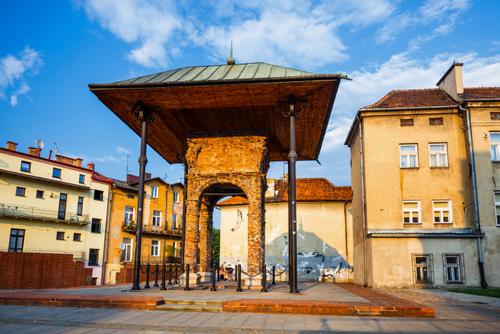 Jewish settlers appeared in the present-day Tarnów region in the middle ages. The first mentions about their presence come from 1445. In September 1939, the Jewish population accounted for 45% of the Tarnów inhabitants. The town was an important centre of religious life, with several synagogues and several tens of small prayer houses, Jewish schools, printing houses, cultural and social societies, rich social life. With the outbreak of World War II, on September 7, 1939, the Germans invaded the town and soon the centuries-old history of the Tarnów Jews was reduced to dust.The oldest part of the district, historically inhabited by the Jews is formed by two streets – Żydowska and Wekslarska. Tenement houses from the 17th and 18th century, which are maintained there, represent the typical compact development, with narrow passes between the buildings, narrow vestibules and tiny courtyards. Characteristic are also narrow front walls, which we do not encounter in other parts of the Old Town. In some houses, there are also iron shutters of former Jewish shops. Judaica in Tarnów are mainly: bimah – a remain of the synagogue, ritual bath and Jewish cemetery.